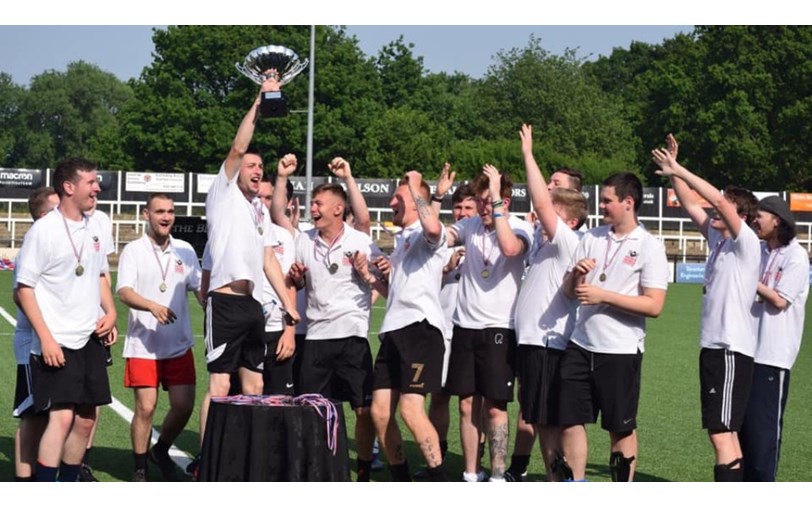 The FALC United vs Sands United London match is being organised by 26-year-old Tom Henderson from Old Coulsdon and 25-year-old Sean Feeney from Caterham.

The two men have hosted charity football matches before at Whyteleafe Football Club and Bromley Football Club to raise money for Freddie Farmer Foundation, Action for Children, Brain Tumour Charity and Scarlett’s Walk. Tom started it as a project at university and it’s grown from there.

Since the first charity football match in 2015, the duo have raised over £2,500 for good causes.

“Everyone enjoyed themselves so much at the initial matches that we thought it would be awesome to have another one,” said Tom, who first heard about the Freddie Farmer Foundation from Red and Blue Crystal Palace News.

“We prefer raising money for charities that help young children as we believe they deserve a good and better life,” added Tom.

Sands United is a unique way for dads and other bereaved family members to come together through a shared love of sport and find a support network where they can feel at ease talking about their grief when they’re ready.

The teams also commemorate their babies’ all too brief lives by proudly displaying their names on the kit worn for every match.

All proceeds from the match are going to Freddie Farmer Foundation, a charity that provides subsidised physiotherapy and support services for children with cerebral palsy and mobility problems, as well as providing support for their families and carers.

To raise the funds spectators pay £2 at the gate on the day.

All other donations are gratefully received as the duo are aiming to smash their £2,000 fundraising target this year.

For more information and to make a donation, visit the FALC United vs Sands United London fundraising page on JustGiving.


We use cookies on our website to give you the most relevant experience by remembering your preferences and repeat visits. By clicking “Accept”, you consent to the use of ALL the cookies.
Cookie settingsACCEPT
Manage consent

This website uses cookies to improve your experience while you navigate through the website. Out of these, the cookies that are categorized as necessary are stored on your browser as they are essential for the working of basic functionalities of the website. We also use third-party cookies that help us analyze and understand how you use this website. These cookies will be stored in your browser only with your consent. You also have the option to opt-out of these cookies. But opting out of some of these cookies may affect your browsing experience.
Necessary Always Enabled
Necessary cookies are absolutely essential for the website to function properly. This category only includes cookies that ensures basic functionalities and security features of the website. These cookies do not store any personal information.
Non-necessary
Any cookies that may not be particularly necessary for the website to function and is used specifically to collect user personal data via analytics, ads, other embedded contents are termed as non-necessary cookies. It is mandatory to procure user consent prior to running these cookies on your website.
SAVE & ACCEPT